Intel Optane is a new breakthrough in non-volatile 3D XPoint memory technology which offers incredible performance, outperforming the traditional NAND flash memory used in a regular SSD and with better endurance than today’s best NAND flash based SSDs and much higher density than DRAM, all of that at an affordable cost.


Intel Optane SSD DC P4800X is the first device which is using 3D XPoint memory technology developed by Intel and Micron, in which memory cells sit in a three-dimensional mesh. It is initially available in limited quantities now, with broad availability expected somewhere in the second half of the year.

The Intel Optane SSD DC P4800X (DC being for ‘data center’) can be used in two ways:

1. As a regular PCIe attached SSD;

2. Or, it can be used as a regular RAM, when combined with an Intel 7th gen Core CPU and an appropriate Z270 chipset, or along with upcoming X299 chipset (due in about 6 months), which allow users to increase the capacity of the physical memory in their PC or server by a large amount. Even though 3D XPoint memory technology reaches just 1% of today’s RAM speed, it might not matter to ones looking to expand the RAM capacity in their PCs or servers without spending a fortune. 3D Xpoint memory is cheaper than conventional RAM. Also, it requires far less energy to operate, so it is a perfect match for data centers and large enterprises. 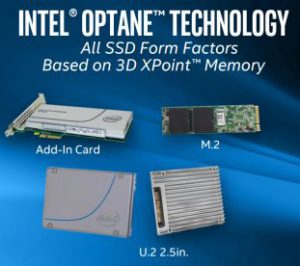